Having recently started to work on soulfu again, I have decided that soulfu wants a shape shifting class.

The elf, as it stands, is just an upgraded soulder, and, due to the ingame book which mentions the elf's ability to commune with animals. I am planning to merge tinker and morph spell to create the morph ability.

Morph Ability: Used like tinker. Maybe I can get a bright light surrounding the elf... If the ability is used while transformed, you are converted back to elf form. The following is a list of potential transformations.


WHAT I NEED TO KNOW:
A. How to add icons: I would prefer not to have the tinker ammo box represent the great rat...
B. Unknown... Will get back to this.

You're going to have to figure this out for yourself unfortunately. Development isn't that active at the moment, and I doubt anyone is around who knows.

Alright; I finished the morph ability; although, it has undergone some changes....

The following was made with a base of noobke's changes.

The Elf is now a werewuff, and transforms with talk, but only if food is over 10% of the maximum.

When in wolf form, food is drained far more quickly, and you gain food from attacking monsters. Wuffs regenerate almost twice as fast as a normal player. At higher levels the elf turns into higher level wuffs. (Dire wuff, Winter Wuff, etc.) Player wuffs are no longer mountable. And lots more stuff which I either forgot, didn't implement, or couldn't be bothered to tell you about. The only problem, to my knowledge, is that the class choosing screen still says elf, not werewuff. This also has a whole lot of balance changes, and other editations; I included venoms improved squire ai also.

I also have another project in the works, namely, the expanded prayer function.

Before this point, prayer has been very limited and one demensional... After... you will have to wait and see.

PS: I don't know how to upload the file... someone please help here!

This sounds really awesome seeing as the elf needs to be a little more different than the soldier. Unfortunately I know nothing about uplaoding files. I suggest you send an email asking the administrater. I'm sure he would know. 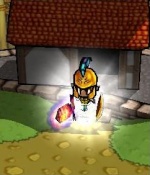