i can upload it somewhere if You want 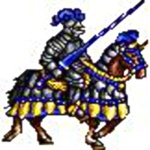 can someone please post a link for a windows version of captain innocuous' soulfu?

BlueChampion wrote:i can upload it somewhere if You want

Hello! If anyone is still listening.

I loved soulfu back in the day, and tried my hand at modding it several years ago. I had no experience doing any sort of programming, and it shows, but I liked what I was able to put together.

A lot of people were able to do some cool things with the game, much more than I could. I could never even get the source code to compile!

There were a lot of cool things about Soulfu. It has an in-game built in music BUILDING system, lots of different classes, lots of cool levels. There are even tiny little boats in the game you can row around

There are also some problems. The game itself is also written in procedural C. If you know anything about programming, you'll know that that is NUTS that a game like this is even functioning at all.

There is no way for different people to collaborate on the game, as every change one person made, everyone else would have to manually add to the game. That was where I tried to do the most work. I would compile the different scripts that people put together and published on the forums. I never had a system of how to do it, but I still have all those old files saved.

If I can recall correctly, the last one I really worked on was 1.6.04. Lots of cool stuff, that I can't even remember.
If you hire a puppy or cat, it will evolve into a wolf that you can ride when it gets to level 3. I think it also can level up into a 3 headed fire dog eventually

This quirky little game meant a lot to me. Anyways, without further rambling, here are the files I have saved up, if anyone is curious.
mediafire.com folder/9dattfiyh2x3q/Full_Builds

Thank you very much for that !

Aelesis wrote:There are a few different packed versions of SoulFu to find around.
Here's the four main ones:

Vanilla SoulFu
Download
This is the original SoulFu 1.5, the way Aaron made it. Nothing much to say here.

SoulFu Saving
Download
This version is the same as vanilla, but it has a very good and powerful saving system.

Captain Innocous' SoulFu
Download
This version has a vast number of improvements, but the saving systems implemented are from much earlier and are a bit less efficient.
It has features such as health and mana regen, pets evolving, improved squires and the monster play cheats (for fun!

SoulFu 1.6.5
Download
This version has a drastically different Healer class, a couple of other smaller improvements, and the saving system from SoulFu Saving. Currently in development, stuff needs balancing and all that.


Let me know if any of the URLs are wrong.
Stay trendy~

Hello, I'd like to know if anyone has these versions, almost all links are broken

Similar topics
» Different Versions dont working!
» Anyone can Post in this Topic All versions of Soulfu That you're Have
» Can't play all newer Solfu versions in fullscreen . wat's the matter ???